Earlier this year, Centrality’s founder and CEO, Aaron McDonald, has been nominated to the list of New Zealand’s top 50 tech founders. In October 2019, their CENNZ token experienced a sharp rise in trading value, catapulting CENNZ into the top 50 cryptocurrencies on coinmarketcap, as Centrality prepares for the launch of its mainnet. Going by the name of CENNZNet, their core product is a Proof-of-Stake blockchain built on the PL^G Toolkit. Time for a recap of Centrality’s business development and a look into the technology behind their blockchain enterprise. 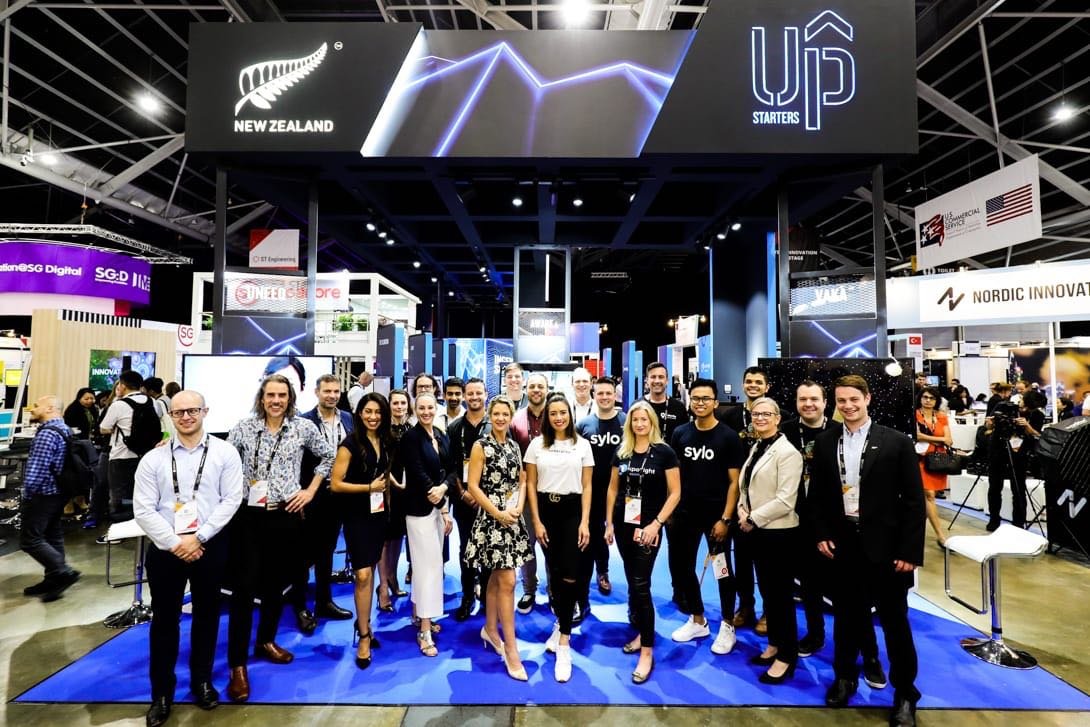 Centrality and core members of their ecosystem at Singapore Fintech Festival.

Founded as a Venture Studio in 2016, Centrality Investments provided capital to various tech and blockchain projects, becoming key partners and co-owners of 10 applications within their first six months of operation. Additionally, Centrality raised over 40,000 ETH in their token pre-sale and received a multi-million dollar research grant from the government of New Zealand, which helped them form more valuable partnerships with projects that helped them develop a first codebase. In early 2019, the Centrality Accelerator added another six projects to the ecosystem.

Notable partners in development are SingleSource and Sylo, who contributed to Centrality’s code library. SingleSource is a decentralized provider for KYC/AML and risk-assessment services, which has been approved as a service provider for document verification by the governments of Australia and New Zealand. Sylo is a decentralized storage platform that allows users to confidentially store data and communicate them to others, while staying in full control of their data at all times.

Another key partner to both Centrality and Sylo is CentraPay, a payment services provider that can be integrated into payment terminals, vending machines, and other Point of Sale systems to allow easy payments in cryptocurrency. CentraPay has made large contributions toward Centrality’s codebase and CentraPay tokens will be offered as staking rewards for the Proof-of-Stake based CENNZNet blockchain, becoming the main payment token for DApps on CENNZNet. At present, CentraPay is integrated in over 70.000 points of sale across New Zealand.

One of this six enterprises selected for the Centrality Accelerator is Yabble. Having already established a successful platform in New Zealand, Yabble connects brands and consumers through a data marketplace, where users can share data relevant for market research, such as survey data and feedback in exchange for Yabble points, which can be redeemed for reward vouchers. Yabble takes utmost care of data protection, keeping users in full control over their data and notifying users about how their data is being used by Yabble’s partner brands. Yabble profits from the Centrality ecosystem, partnering with CentraPay, Sylo and SingleSource.

Overall, these partnerships demonstrate that the Centrality ecosystem is a tightly knit community of DApps that grow together by making efficient use of synergies and network effects.

There is a multitude of tokens revolving around the Centrality ecosystem. At the heart of this token family lies CENNZ, which was the token issued in Centrality’s TGE in January 2018, hitting its $100 Million hard cap in under six minutes. Like many tokens that were issued by token sales, CENNZ suffered a post-ICO sell-off period, sending its price down to $0.04 from its initial ICO-price of $0.17 by September 2018.

In this special case however, token prices and market caps are to be taken with a grain of salt, as CENNZ historically always had a low trading volume. Even during the sell-off, the 24-hour trading volume rarely exceeded $500.000, which is outstandingly low when compared to other cryptocurrencies playing in the same ballpark. Since the beginning of 2019, trading volume was virtually zero, with some days not recording even a single trade…until October.

This means two things: Firstly, the token price and subsequently the token market cap move easily into both directions, as the market has a low liquidity. Secondly, most investors who bought CENNZ at the TGE held on to their tokens, valuing them at a higher price than what they were selling at. Their patience might just have paid off, as Centrality released its reward programme this year in October, where CENNZ holders can stake their tokens in preparation of the mainnet launch, scheduled for Q1 2020.

So far, the reward programme was an overwhelming success, as over 500 Million CENNZ (almost 50% of all CENNZ in circulation) have already been staked. This is likely the main reason for the recent increase in token valuation and trading activity. At the moment, CENNZ has the 13th highest market cap among all tokens on the Ethereum network. As such, CENNZ might have been one of the most underrated cryptocurrencies throughout the first half of 2019.

While the primary function of CENNZ is staking and validation on the reward programme and later on CENNZNet, staking rewards will be paid out CentraPay tokens, which basically are Centrality’s equivalent to gas on Ethereum and are used to pay for transactions on CENNZNet. With this dual token approach, Centrality aims to keep transaction fees stable, while at the same time reaping the benefits of network effects on CENNZ.

Finally, DApps on CENNZNet can create their own tokens, called user tokens. These tokens adhere to established standards, such as fungible, non-fungible, or asset backed token models.

Undoubtedly, one of the largest barriers to mainstream adoption of blockchain applications is the poor user experience of DApps. Centrality envisions to tackle this problem by creating an ecosystem where multiple DApps operate on a shared marketplace. For this purpose, Centrality provides an SDK that allows developers to create a consistent user experience across their different DApps, as well as APIs that allows data to be exchanged between DApps.

Besides having a common user experience, DApps on Centrality are also incentivized to share their user base. If a DApp onboards a user that later uses another DApp within the Centrality ecosystem, the onboarding DApp receives a reward in CENNZ tokens. Thus, DApps can grow together by forming mutually beneficial relationships.

Parallel to opening their testnet to developers, Centrality has published an extensive code library that is organized into modules, which can be bought by DApp developers in exchange for CENNZ. Additionally, Centrality provides the core technology for DApp development. In order to use this technological foundation and the Centrality ecosystem, DApps allocate a share of their token pool to Centrality. This enables developers to reuse existing, well-tested code instead of having to develop it on their own.

The following modules are publicly available from Centrality’s code library: 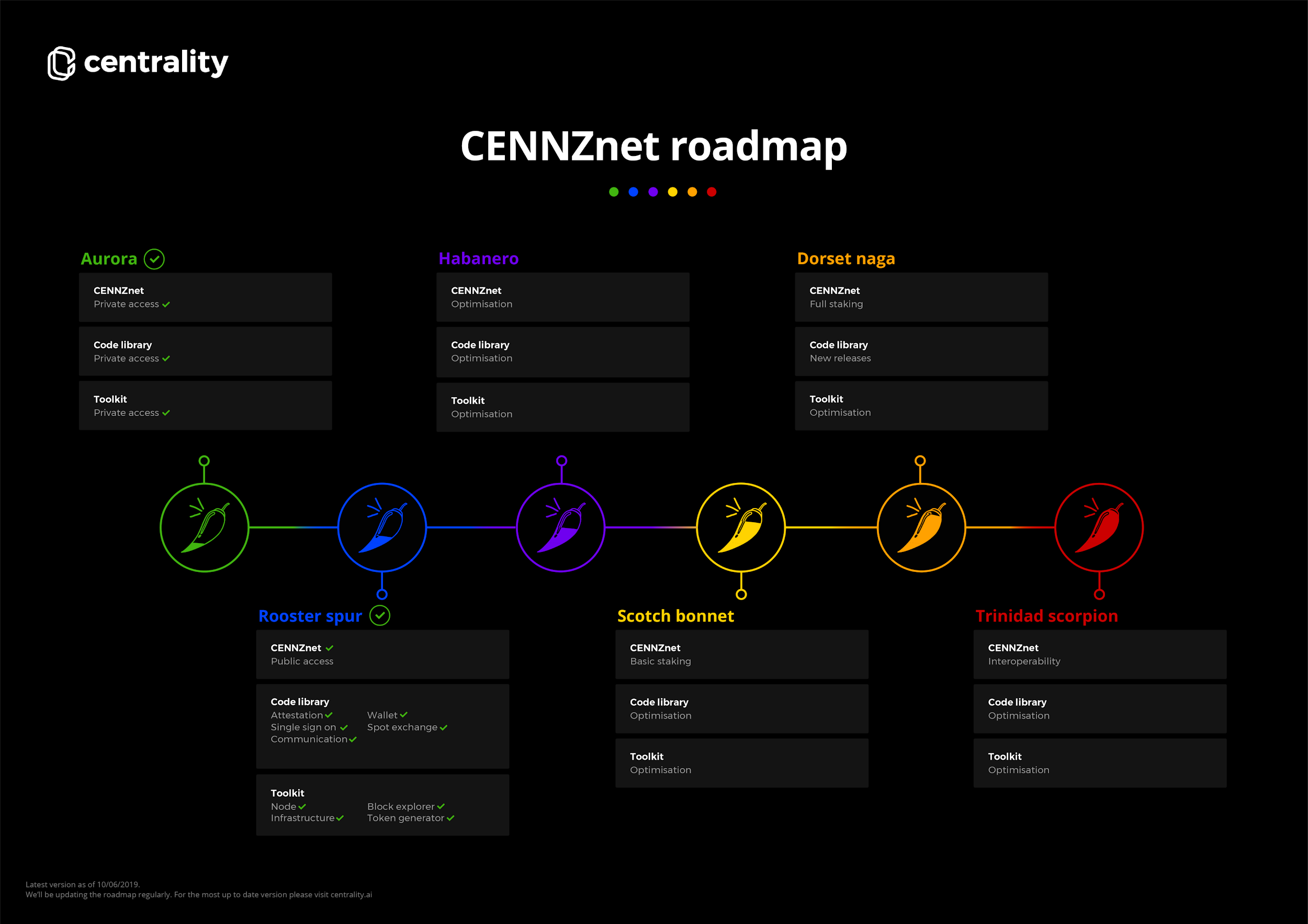 With the release of the code library and the toolkits in May 2019, Centrality has hit the second in a series of six milestones that comprise CENNZNet’s development, moving on to the Habanero phase. Since the reward programme already offers basic staking functionality, the developers are currently either partially in the Scotch bonnet phase, or close to hitting this milestone, although there has not been a corresponding statement on social media yet. Since the mainnet needs full staking functionality, the Dorset naga milestone can be expected for Q1 2020.