Still, projects have to build the smart contracts and customise them according to their needs and product offering. This is by no means an easy feat as it requires developers to have proper understanding, technical knowhow and expertise to create well-functioning applications.

As things stand, the existing tools for developing Dapps on Ethereum are still quite basic while the solidity programming language has its fair share of limitations. The running environment is quite constrained as all events, no matter how small, have to be recorded on Ethereum’s main chain.

The problems with the current developer environment do not end there. Since the protocol is decentralised there is no standardised approach to the creation of applications. As such, there is no effective means to guarantee the security of smart contract codes. This is not helped by the slow progress from the community in terms of support for emerging issues. There are limited online resources to help the Ethereum developer community tackle these pressing problems and those likely to occur in the future.

The developer community that is supposed to build a decentralised future cannot thrive in such an environment that does not regularly offer updated and advanced guidelines. There is a need for a robust and active ecosystem that readily avails all the necessary tools needed to create the next generation of decentralised applications.

Tokamak Network is creating an ecosystem to support the developer community

Tokamak Network is creating a developer friendly ecosystem in the following ways:

The Tokamak Network is rebranding to an on-demand platform that supports the development of Dapps on the Ethereum blockchain. The platform will leverage the Tokamak protocol that allows developers to create applications on plasma chains with similar properties to the main chain. Having become the first Turing complete plasma protocol, Tokamak is able to extend Ethereum’s functionalities onto new chains thus boosting the network’s scalability significantly.

Tokamak seeks to build the on-demand platform around this protocol that enables the creation of multiple specific purpose layer 2 solutions. Simply put, developers will have dedicated chains for each project that allows them to try out various implementations and iterations of their solutions in an independent environment. This is expected to spark creativity and open up the ecosystem to more organisations and projects interested in creating decentralised products and services.

The on-demand Tokamak platform will be open to all developers working in the blockchain community. More importantly, Tokamak is opening up its plasma protocol for use by other developers and community members interested in creating scalability solutions for Ethereum. The team behind the revolutionary protocol believe in collaboration and harnessing efforts, resources and time to expand the blockchain industry.

In this spirit, Tokamak is extending its invention for use throughout the community. By doing so, they aim to shift the focus from the search of layer 2 scaling solutions to building more decentralised applications that expand the network’s use across multiple sectors. 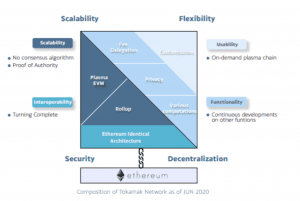 Encouraging collaboration between developers and projects

In the same vein, Tokamak is encouraging the Ethereum developer community to work together to provide useful resources for use by peers. The on-demand platform will serve as a one-stop-shop where developers can earn by making useful contributions to various projects within the ecosystem.

On the other hand, organisations will get access to top developers within the space that they can hire out to perform critical functions such as smart contract development, finding bugs, stress testing, and code audit among other tasks.

This arrangement will result in mutually beneficial outcomes in that projects can scale their resources as needed while developers get paid for their contributions to different causes.

For instance, developers can generate general components needed for specific applications that they can rent out to interested projects. This will help the creators to accelerate the development process by first compiling the core components of their applications then later customising the product according to their needs.

Tokamak is leading by example

The Tokamak Network intends to go beyond the competition in the industry and work on providing easy and trustless ways to build decentralised applications. The team behind the protocol are leading by example following their rebranding to a blockchain R&D company that provides support to the developer community. The company will also provide layer 2 technology solutions to interested companies through the on demand platform to ease their journey in the decentralised world.

This support will make it easier to use and adopt blockchain technology, especially for outsiders that do not have proper understanding of the technology but believe it can enhance their operations.

IT outsourcing projects: UK vs USA

The Rise of the Bitcoin Class