Metaverse tokens have soared massively in the first two weeks of January with many cryptocurrencies seeing a price spike of more than 50%.

Many analysts have attributed this to positive market sentiment for cryptocurrencies, renewed demand for non-fungible tokens (NFTs), and the quest by many individuals and companies to be a part of this growing sector.

Decentraland (MANA), The Sandbox (SAND), Flow (FLOW), and Immutable X (IMX) are among the metaverse tokens that have brought more than 50% gains to investors.

Decentraland (MANA) has recouped some of 2022’s losses

Decentraland is among the most recognizable metaverse platforms in the decentralized finance (DeFi) space as it allows users to experience shared digital experiences.

MANA plunged by more than 90% in 2022 due to negative market sentiment that wiped off trillions of dollars from the crypto economy. Despite this, the token has recouped some of the losses by increasing by 145% from an opening price of $0.297 on Jan. 1 to reaching a yearly high of $0.7278 on Jan. 16.

Much of the gains came from the introduction of new features in a tweet from Decentraland on Jan. 12. The features comprise the highlighting of avatars, new user profiles, links in profile, new friend request flow, and differentiated nametags.

This led to an increase in trading volume which reached a daily high of $879 million on Jan. 15 which has helped push MANA’s market capitalization from $560 million to around $1.3 billion. 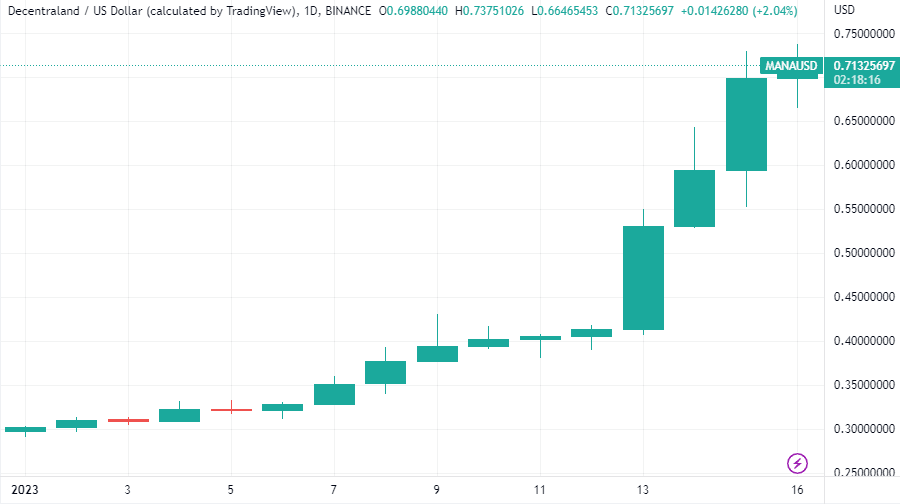 The Sandbox spikes by more than 90%

SAND has been going up this year due to updates lined up for The Sandbox’s Game Maker 0.8. According to the Sandbox, Game Maker 0.8 will bring new multiplayer gameplay features, new lighting and visual effect features, video and audio streaming, and equipment and wearable support in social hubs.

This has created an enormous excitement within the Web3 community and many stakeholders of Play-to-Earn (P2E) platforms believe this can help transform the way many people engage with the Sandbox metaverse. While the trading volume for Jan. 5 (the day of Game Maker 0.8)’s announcement was $124 million, daily trading volume has gone, and has so far reached a monthly high of $624 million on Jan. 14. As of Jan. 16, The Sandbox NFT sales for January was approximately $262,000. 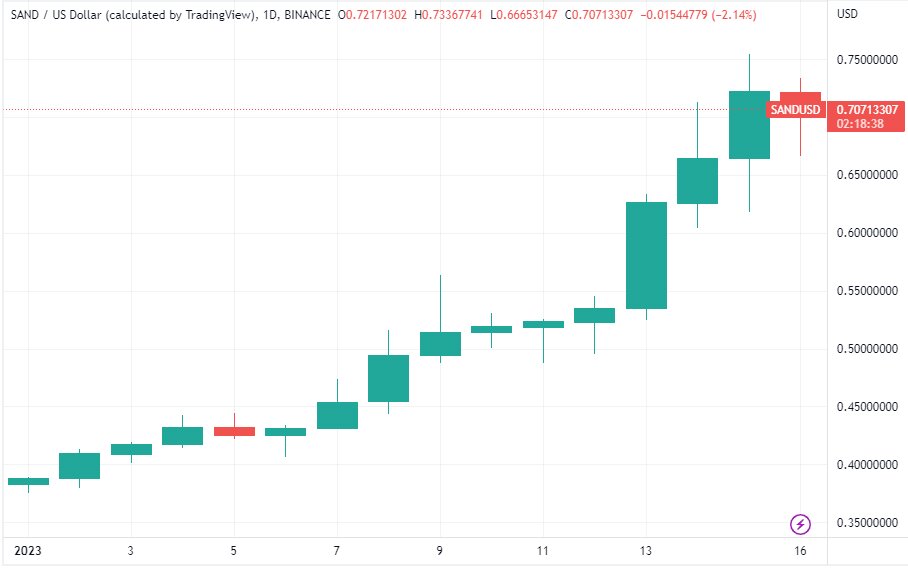 The Flow blockchain which is NFT-specific has been integral to the fortunes of the NBA and NFL. NFT sales from NBA Top Shots and NFL ALL DAY have totalled $2.74 million so far in 2023 with $1.2 million and $1.5 million respectively. 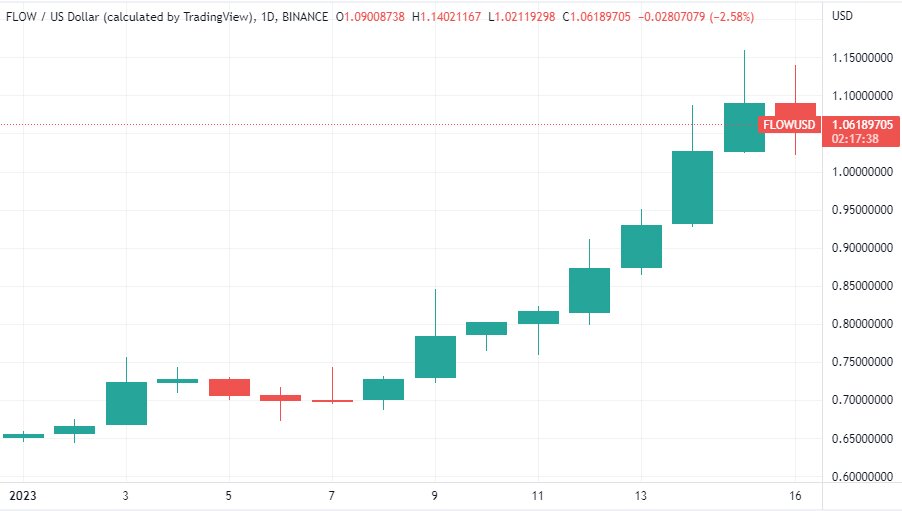 IMX is the novel token of Immutable X, a platform that tags itself as powering the next generation of Web3 games. There has been a growing demand for Immutable X NFTs due to their 100% carbon-neutral feature. As of Jan. 16, more than 58 million NFTs have been minted on the platform and more than 10 million NFT trades have been made in the process.

This has made Immutable X one of the biggest blockchains by all-time sales volume. Immutable X NFT sales have surpassed more than $300 million from the activities of over 124,000 buyers involved in more than 12 million transactions.

The boom in the demand for NFTs being minted and renewed interest in NFTs have reflected positively on IMX’s price. The token has rose by 56% year-to-date (YTD) after opening at $0.3835 on Jan. 1 and reaching a monthly high of $0.5986 on Jan. 16. This article is originally from MetaNews.

China Snaps Up Golden Shares In Tencent And Alibaba